Bison at Home on the Range 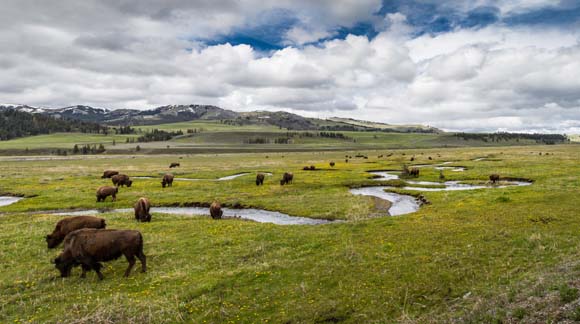 The Blackfeet Tribe, in conjunction with the Wildlife Conservation Society and NPS Biological Resources Division, have been working to bring bison back to their lands through the Iinnii Initiative which calls on the Blackfeet People to develop a new vision for land conservation on the Rocky Mountain Front and to help protect Blackfeet culture by creating a home for buffalo. Realizing this vision will create new, nature-based business opportunities and jobs. “Iinnii” refers to buffalo in the Blackfoot language and has been the central focus of dialogues, workshops and summits among the Blackfoot Confederacy Tribes, in partnership and with support from the Wildlife Conservation Society and, in particular, the American Bison Society, going back to 2009.

On  April 4,  2016,  the  tribe received  88  plains bison from Elk Island National Park in Canada. These animals will form the nucleus of a herd that tribal leaders envision will someday roam freely across a vast landscape: The Blackfeet reservation, the Chief Mountain area of Glacier National Park, the grasslands of Waterton National Park, adjoining lands managed by The Nature Conservancy, and nearby Blood and Kinai First Nations lands. The tribe is poised to receive additional bison from Elk Island National Park in 2017 or 2018 to bolster this core herd. The lands they  are targeting for initial recovery of this species include the Badger-Two Medicine area as well as Glacier National Park.

This project  will assess the  current status of habitats on the east side of the park after more than a century of use by native wildlife and trespass livestock (primarily cattle). The results will provide a baseline for future comparisons when and if bison are allowed to return to park lands. Although bison have been absent from these habitats since the late 1800s, this landscape evolved with their presence. Of all the megafauna species found in what is now Glacier, when Lewis and Clark passed through the area, American bison and pronghorn antelope are the only species currently missing from this ecosystem.

This project will identify how landscape use by native wildlife may have been altered by the removal of bison and introduction of trespass livestock. It will examine use of riparian areas by native wildlife and trespass livestock, assess  diversity  of  bird  species  in  areas  historically utilized  by  bison,  map  distribution  and  presence/absence of rare plants, and utilize modern laboratory technology to determine which plant species are currently being eaten by native wildlife and trespass livestock. The results will be documented in a report and maps that park managers will use to compare future changes to the current state. Having this information will help park managers to understand how native ungulates currently interact with the land. It will also inform management decisions for the possible return of bison to park lands.

With the eventual return of free-ranging bison to Blackfeet lands, it is possible that bison will return to park lands in the future. However, before considering whether to allow them to return, park managers must first understand how native wildlife and trespass livestock are currently using  the landscape. This information will allow them to monitor and document any future changes in wildlife use and/or distribution on the landscape, and help guide management decisions relative to those potential changes.