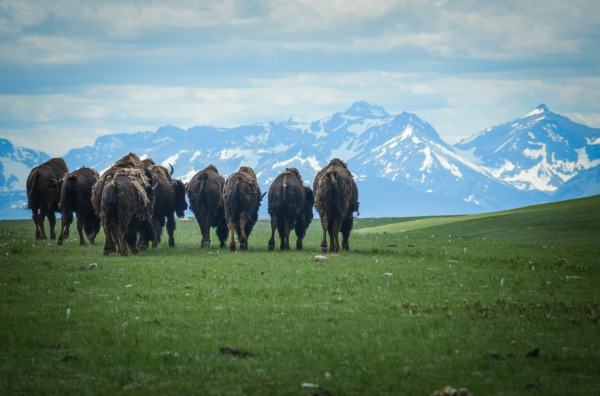 The yearly cycle of the Blackfeet began in early spring as individual bands left their winter camps to begin an intensive season of hunting and root collecting. Women and children went to the mountains to dig for roots, while small bands of hunters moved east, seeking bison. Food gathering continued through the summer until the annual Sun Dance celebration, when the various bands would convene for several weeks on the plains. At the conclusion of the Sun Dance ceremony, the various bands would disperse again; some returned to bison grounds, while others headed to the mountains to hunt elk, deer, bighorn sheep, and mountain goats, to cut lodge poles and gather berries. As fall arrived, the bison moved west and north to their wintering grounds, and some Blackfeet bands would reassemble into larger groups for communal hunts. The annual cycle of hunt and harvest would end with the establishment of winter camps in heavily wooded river valleys near the mountains, sheltered from the severe northerly winds that swept the open plains.

In collaboration with the Blackfeet Tribe, Parks Canada, private landowners in US/Canada, and NPS units throughout the country, Glacier National Park seeks to restore this genetically unique wild bison herd to the Chief Mountain area of the park.

As the world’s first international peace park, Waterton-Glacier works across borders and jurisdictions and is a model for the NPS in trans-boundary conservation efforts. Collaborating in two countries and with tribal governments on both Canadian and US sides, this project demonstrates a new model for landscape-scale conservation.

For over a decade the Blackfeet Confederacy have been working to have a bison herd that could utilize portions of the park. This project will help meet that goal and also to culturally reconnect bison to Blackfeet Confederacy lands on both sides of the border. Restoration of an umbrella species such as bison across the Crown of the Continent ecosystem will help restore the ecological integrity of the park’s grassland areas. Bison are one of only two original species missing from Glacier’s largely intact ecosystem – the other being a now extinct Caribou. This restoration will also reduce the impact of trespass cattle, which has been an ongoing disturbance in the park for many decades.

In the first year of this project a partnership model will be developed with key stakeholders, goals set for the project and consult with the appropriate agencies and stakeholders.

Further, a documentary video of the process will be created to follow the building of a model of public/tribal conservation that has yet to exist in the United States.