Biking the Going-to-the-Sun Road before it opens to vehicles is a must-do springtime activity in Glacier. Mid-May marks the beginning of the Conservancy funded hiker-biker shuttle, when free shuttles are equipped with trailers to transport bicycles.

This free shuttle system operates on weekends mid-May until the Going-to-the-Sun Road is fully open to vehicles for the season.

Shuttles run between the Apgar Visitor Center and Avalanche Creek, with a stop at Lake McDonald Lodge.

Apgar Village is a popular place to take in the scenery and wildlife during the spring. The view of Lake McDonald from the shoreline in Apgar is unrivaled and accessible year-round.

Another popular area to explore is the Camas Road. Take a drive along this scenic stretch and keep your eyes peeled for a diverse abundance of wildlife.
Always remember to maintain a safe and respectful distance from any wildlife in the park (75 feet from most wildlife, 300 feet from bears). Never approach or feed wildlife, and observe them with binoculars, spotting scopes, or long telephoto lenses.

As a rule of thumb, hiking trails on the edges of the park tend to be snow-free quicker than towards the continental divide or middle of the park.

In the mid to higher elevations, trails are usually under 100 percent snow cover in the spring. Some trails do not melt out completely until late July.

The most popular option during the spring is to park at the vehicle gate closure and hike past the closure on Going-to-the-Sun Road.

Camping is limited in the spring but available year-round at Apgar and St. Mary Campground.

There is no running water and flush toilets at either of these campgrounds in late fall, winter and early spring.

Spring backcountry camping can be challenging since many of the campgrounds and trails are still under snow. For more information and to obtain a permit, visit the park’s backcountry page or call 406-888-7800. 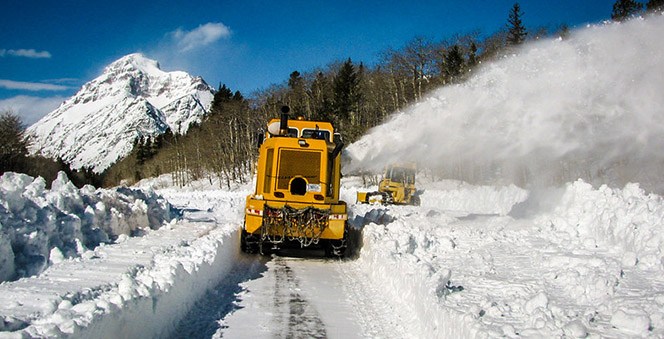 Spring is a beautiful and quiet time to be in Glacier National Park. The season arrives later in the year and is still much colder than most places.

Plowing of Glacier’s roads begins in late March on the east side of the park and by the beginning of April, plow crews turn their focus to Going-to-the-Sun Road. Plowing can take two and a half to three months to complete before the road fully opens.

During this shoulder season, lodging and other guest services are limited in the park but available in neighboring communities. Most of the concession services in the park reopen for the season in late May to early June.